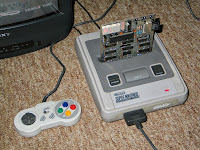 A year ago I have acquired a pure SNES console without any additional peripherals (joypad, power supply, video cable etc.). The console was untested. Some months later I've also found some cartridges for it (Super Mario World), thus the story continued: connected the console to TV, inserted a cart and turned it on: IT WORKED! Perfect! ;)

Thousands games are available for this great console; most of them have superb 2D classic pixel graphics and perfect stereo digital audio. The graphical and sound capabilites are much better than Amiga 500; 256 colors on the sreen at once, multi hardware layers, extra large sprites, 8 channel audio D/A, mode 7 etc.

After testing some games in emulator the results were fantastic. Chaos Engine looked similar to the A1200 version (it has 2 frame scroll, why?!), but Street Fighter, Final Fight and Mortal Kombat 2 were exactly the same as the original arcade versions!

The next step was straightforward: purchase or develop a flash cartridge for the SNES. A brand new Super UFO costs 70-80 USD, others also have similar price.

Below You can watch the preview video of my own developed SNES SFC-32 flash cartridge.

Another usual problem with me: if I order the Super UFO, the delivery time will be 30-40 days. Once it arrives, I'll test it, play 1-2 hours and the whole stuff will not be interesting anymore. I know myself. So what to do? The available options were:

1. Build a flash cart based on someone else's design or
2. Develop a completely own cartridge

Of course, option 2 has been selected. The development procedure is much more interesting than playing games with a factory made cartridge. Not mentioning the required 2-3 months of hard work. ;)

There are many cart hacking schemes available freely on the Internet. 90% of them replace the mask programmed ROM with a flash ROM. The flash programming requires EPROM programmer. Some of them has it's own programmer hardware (USB etc.). The most perfect ones use SD card for data storage and games are selectable on the TV screen using the SNES gamepad.

I needed an optimal solution for my design: not the most complicated one, but either not a primitive realization. The requirements became clear quickly:


The first step was to obtain a few 256 kByte 8 bit parallel flash EPROMs  and wire one of them to a PIC 16F873 microcontroller for initial tests. These chips are available from various old PC motherboards (Pentium 1 category).


After learning the flash chip datasheet I have managed to write low level routines in C (with MPLAB) to read, write and erase the flash content.

Once this worked, connecting the SD card was the next step. I have made an adapter cable to quickly connect the SD card slot to the breadboard. 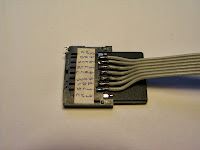 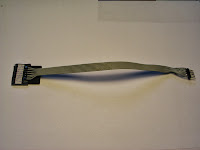 Open source SD libraries are available for larger microcontrollers, but not for a 4k PIC 16F873. As usual there are tons of documents available on the Internet how to initialize the SD card, how to read / write data etc. The most useful document was the Sandisk SD user manual.

Once the SD read operations worked, I have copied (with dd) a SNES game ROM dump to the card from sector 0 and invoked the flash writer routine. The system copied the ROM file to the flash memory successfully. The SNES booted up with it (the first tested stuff was Top Gear, it is a 512 kB ROM).

As the design became more complex, the microcontroller has been replaced with a larger one: PIC 16F887 with 8 kiloword program memory. Buttons and LED display have been added to the breadboard design.

At this point I needed a FAT 16 filesystem. There is no such library available for a small device like a 8 k PIC, so I decided to write my own FAT 16 implementation (read only).  Once it worked properly, the breadboard design achieved 95% of completion. 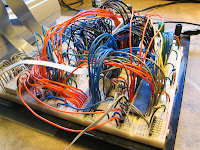 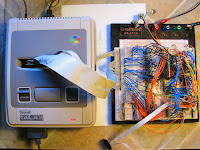 During the test cca. 90% of games were running without any problem. Games not working were which require FX chip, check SRAM (copy protection) etc.

The next step was to design a 2 layer prototype PCB. 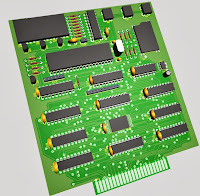 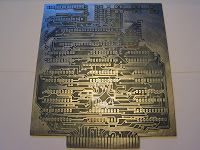 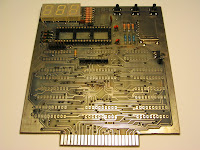 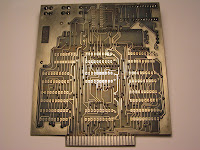 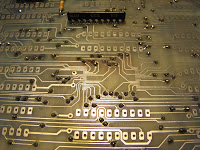 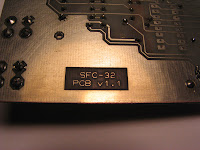 The system is working perfectly, without any issue. The original goal has been achieved, I can play almost every SNES game I would like.

You can find the v 1.1 schematic diagram and some additional images below. 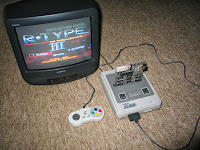 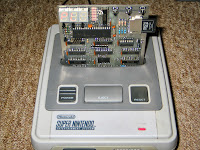 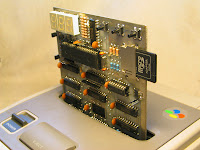 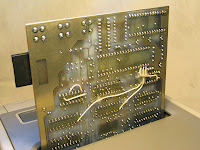 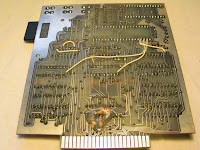 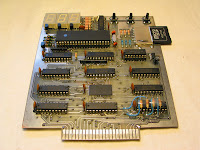 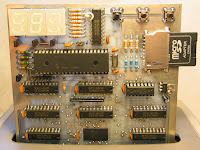 
All materials presented on this page are Copyright © 2013. Viktor K. All rights reserved.
Posted by mc68k at 1:03 AM