Classic 520 is not a new project; the initial tests were already completed long time ago, back in 2016. HC508 is a nice card, but the 68000 lacks one important feature: the Vector Base Register.. VBR is used in 90% of WHDLoad stuff to support the quit key. Needless to say, every WHDLoad slave can be modified to support the quit key, even on a stock 68000 CPU, but back in the days people who wrote the slaves used 68020-030 based cards and there was no need to add those extra 10 lines of assembly code to handle the quit key without a VBR feature.

Since I can't modify hundreds of WHDLoad slaves, I've decided to design a turbo board with a 68020 CPU! :) This is how the Classic 520 was born.

Another thing is the data exchange between PC and Amiga. The CF card can be mounted and even booted in WinUAE, copying of files is easy, but this method requires powering down the Amiga, removal of the CF card etc. How much better would be a hot swap feature? And if it is already a hot swappable, then why not to use a SD card instead of CF as a data transfer media, with FAT95 filesystem?

The final version is built on a professionally designed 2 layer PCB, fabricated at PCBWay factories in China. They did an excellent job: their website is well designed, Gerber uploading and price quotation is straightforward. The design review time frame is very short; the production started almost immediately once the order has been confirmed. Wrapping and shipping leaved nothing to be desired: the parcel arrived to the destination country in 14 days, even in a Covid situation. 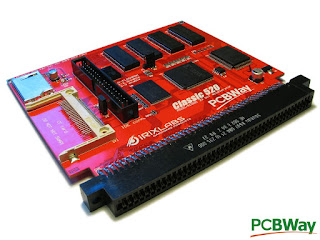 The first prototype already exists: it is built on a homebrew PCB with tons of patches. The basic design had a CPU, RAM and autoconfig feature. It was enough to complete the development and debugging of the system control logic. I have used a parallel port ZIP drive as a mass storage media. It is large (100 MB per disk), but at least slow. :)

Below are the pictures of the initial prototype on a homebrew PCB: 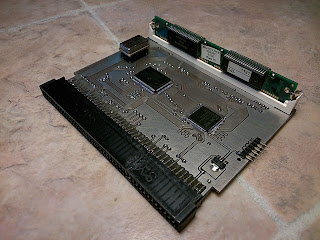 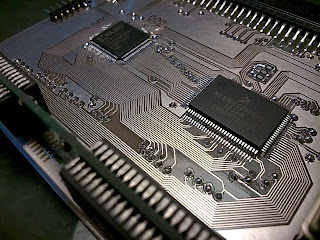 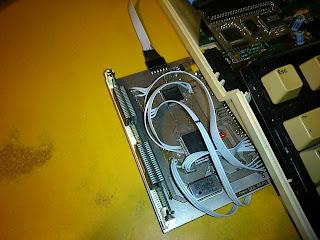